So I'm building the rig and its funny to remember so many parts of rigging that I forgot. I feel so rusty. I haven't rigged a character in years. I don't want to do human IK b/c its more a pain than its worth. I'll do simple IK/FK switching as in the one built into the IK system in maya. Everything is going to back down to the end joints anyway so no point in over building, at least not until I start seeing I need more. There aren't that many moves I need right off the bat. He doesn't jump. Its crouch, run, walk, shoot(x3 for the 3 guns), back to wall, idle, open door? Not trying to make a AAA title just get the key moves out for game testing.
Anyway as I rig I'm for to remodel certain areas like elbows knees, and I added a few things that have been bothering me, like figured a shoulder pad that works for him. Also its going to look quite different when textured, I'm planning on learning zbrush in about 2 months when I push the art harder, but for now I did a temp quick pass at texturing Pollocks face to give an idea of the look he will have. This will all be redone, just a color pass. 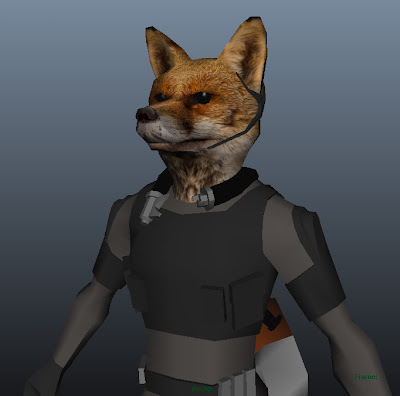